Pudding it out there: Sainsbury’s Holiday Commercial Features Private Brand 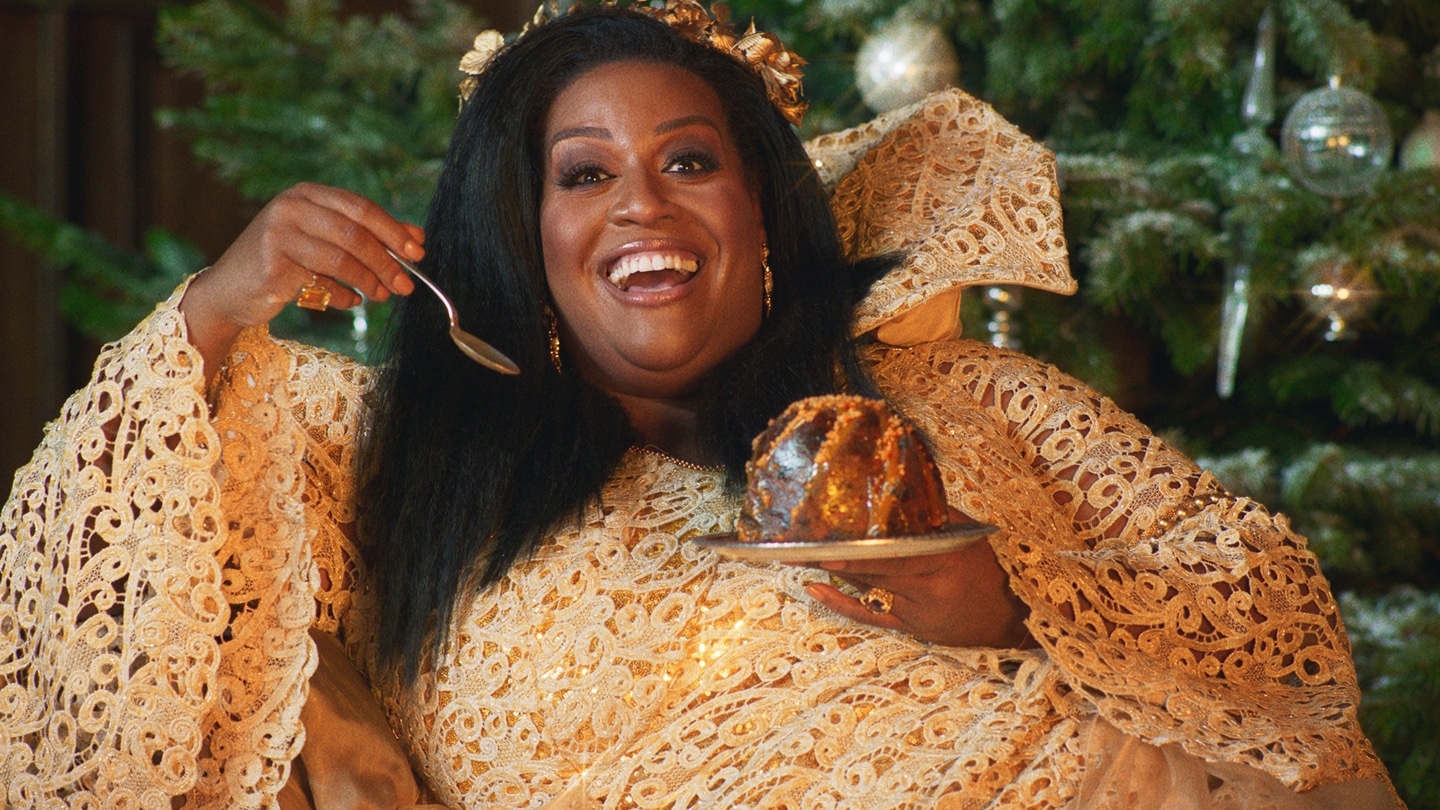 Through a light-hearted tale, this year’s advert celebrates the innovation and creativity of the grocer’s Retail-Owned Brand (private brand) Sainsbury’s Taste the Difference Christmas range. Centering on one of the most divisive foods – the traditional Christmas pudding – the tongue-in-cheek advert brings to life the imagination and ingenuity which has breathed new life into the festive staple.

The story is set in an imaginary medieval world where a festive feast is planned. A Countess, played by TV personality Alison Hammond, oversees choosing the food, but her distaste of Christmas pudding means it is strictly off the menu – that is, until a young cook changes her mind.

The scene opens with a wide view of a castle surrounded by a forest and mountains. As a dragon flies across the screen, a voiceover from Stephen Fry proclaims: “In a far, far away land, a feast was being planned”.

The scene then cuts to a crowded room where a line of chefs patiently wait to present menu items for a festive feast to The Countess. An adornment of festive food is happily received, from Sainsbury’s Taste the Difference Crab Thermidor Crumpets to Cider Glazed Gammon.

However, when a nervous young cook offers a traditional Christmas pudding, The Countess proclaims: “I’ve never really liked Christmas pudding” and blows out the pudding’s flame. Met with gasps from onlookers, The Countess orders the cook to “Bring [her] something different. Or else.” Stricken with terror, the young chef is back in the kitchen pondering The Countess’ order. The boy has an epiphany and quickly gets to work.

Set to a medieval instrumental version of Wheatus’ ‘Teenage Dirtbag’, the cook works day and night, mixing ingredients and even stealing an enormous biscuit from a disgruntled giant. Looking triumphant, the chef admires his final creation.

As the Countess announces its “treatie time,” the cook approaches, presenting a cloche to reveal a Taste the Difference Caramelized Biscuit Christmas Pudding. Less than impressed that the cook has ignored her and decided to serve Christmas pudding, the room falls into tense silence as they await her verdict.

After a forkful and a moment of pause, The Countess asks, “Is that caramelized biscuit?” She then proclaims, “Mmm…that’s a bit of me” and breaks into laughter. The room fills with cheer and applause as the cook is praised with a “Well done Babs” and a pat on the back.

Laura Boothby, Head of Campaigns, at Sainsbury’s says: “Food plays a central role in any celebration, and we wanted to bring to life the imagination and innovation that goes into creating our Taste the Difference Christmas range. We also wanted the ad to provide some fun and light-hearted Christmas cheer and who better to do that than Alison Hammond.
“The festive feast is a quintessential Christmas moment for many and the perfect setting to celebrate what Sainsbury’s does best: delicious, quality, great value food. We’re always creating and developing new recipes and Christmas is the perfect time to experiment with new twists on traditional flavors.

“We’ve focused on the Christmas pudding specifically because we know it’s divisive – people love it, or they hate it – and that’s why we’ve created the Taste the Difference Caramelized Biscuit Pudding. Pudding lovers can still opt for the traditional dessert, but those who aren’t fans can try our innovative take on the Christmas classic instead.”

Alison Hammond says: “I absolutely loved playing The Countess in this year’s Sainsbury’s Christmas advert. It got me feeling all festive and was such a laugh!”

“The Taste the Difference Caramelized Biscuit Christmas Pudding was absolutely a bit of me and will definitely make an appearance on our table this year. Just not sure if I can wait until Christmas day to try it again!”

The advert is one aspect of Sainsbury’s Christmas marketing campaign, with more following over the next few weeks.

This Autumn, Sainsbury’s is investing £60 million in great value food and grocery via its Sainsbury’s Quality, Aldi Price Match campaign, Price Lock and Special Offers. An additional £5 million is being invested into Argos and Habitat furniture lines.

This forms part of Sainsbury’s two-year plan to invest £500 million to ensure the items people buy most often are on the shelves at the best prices. Customers can find low prices on everyday staples in stores and online – from chicken breasts to mincemeat, butter, onions and bananas. The retailer will also be launching a new community initiative, supporting charities who work with those in need. More details will follow later this month.

This year’s advert was created by global advertising agency, Wieden+Kennedy London. The 60” advert launches for the first time on Friday 4th November. A 20” and 30” cut will also be shown across TV and on social, with the full 85” advert available to watch on YouTube.

Freddy Taylor and Phillipa Beaumont, Creative Directors, at Wieden+Kennedy London say: “To pud or not to pud, the age olde festive question. Every Christmas the pudding debate raises its fruity head again but this year the debate goes fairy tale. We’ve enlisted Countess Alison “the laugh” Hammond, an intimidated young chef and a bardcore version of a Wheatus classic to show the nation there’s a new pud in town.”

For those like The Countess who dismiss Christmas pudding without having tried it, Sainsbury’s is opening the Pud You Dare Café. Visitors can enjoy a traditional pudding or try the brand-new Taste the Difference Caramelised Biscuit Pudding for free.

Pud You Dare Café will be open to the public 24-25 November at HELLO LOVE, London. Details of how to book will be announced on 10th November.

By Christopher DurhamPublished On: November 9th, 2022